Arizona cowboy…   who dallies his caught cattle when roping.

Texans TIE their ropes, hard & fast, to their saddle-horns. We Arizonans Dally-Whelter, or wrap, their lariat rope around and around our saddle-horn.

Texans really object to that method.

This story is continued in George’s Books 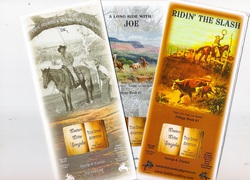